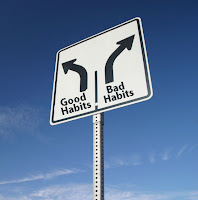 Henry Ware Jr. warns of the power of habit in this continuation of "Progress of the Christian Life"
"Remarks to the same purpose may be made respecting the relation which subsists between principle and habit. Habit is a thing of tremendous power: it is sometimes omnipotent in man; and it is of the greatest consequence that its energies be as much as possible, and as easily as possible, secured on the side of virtue. It may be the greatest helper or the greatest hindrance to improvement. It was intended to be the former; and yet to how many, through life, does it prove the latter ! In how many men does virtue make toilsome growth, because clogged, thwarted, depressed, by unfortunate habits! — habits formed in early life, established in the flesh, rooted in the affections, woven into the daily routine of conduct, till they become a part of the very nature; and the poor wretch whom they enthral is bound down to a miserable insignificance of character, and yet is wholly unaware of their deleterious predominance. They arc habits, for example, of luxurious living, of perpetual personal indulgence, of slothfulness, of mental inaction; they are around him like a heavy and deadening atmosphere, through which his spirit has to make its way upward, and by which its flight is perpetually retarded. It has always been so, and he does not know it; or, if he knows it, how difficult to enforce the remedy ! But in most instances he has no conception of the true nature of the evil which hinders him; is not, perhaps, even aware of his grievous want of alacrity and progress — like the perpetual invalid, who has borne about with him from time immemorial a seated disorder which enfeebles him, but has no violent symptoms, and who still engages in all the general duties of life, without the vigor and delight that other men know, but with all the vigor and delight that he ever knew, and therefore without any consciousness of the extent of his own deficiency ; and who never can be conscious how far he is below the vigor and spirits of other men, except by being delivered from his ailment and made like other men. So is it with him whose moral power is palsied by the unpropitious habits I have referred to: he never can know the degree in which they are an injury to him, until, having thrown them off, he sees how rapidly he rises without them."

Blessings
Posted by slt at 5:42 AM