the world is a proud place... 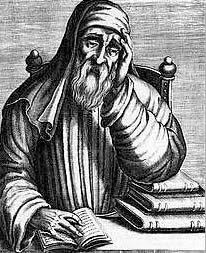 Longtime readers of this space know of my love for Plutarch and may have seen my "Plutarch Blog" at: http://2milejournal.blogspot.com/. After a short break, I am back at work on Brother Plutarch and will be posting on the "Moralia" pretty regularly. I urge you to visit periodically. I will also be posting from one of my all-time favorite books, "Emerson's Plutarch" by Edmund G. Berry. Why Plutarch? This from Emerson explains a bit...

"Go with mean people and you think life is mean. Then read Plutarch, and the world is a proud place, peopled with men of positive quality, and with heroes and demigods standing around us, who will not let us sleep."

If it naive to want to believe in the world as a "proud place" when all about it appears "mean" then count me among the naive...

Blessings
Posted by slt at 8:49 AM No comments:

Readers of this space know that I love Ralph Waldo and the Transcendentalists. This, however, is a love that is not blind. The fascinating Orestes Brownson (as discussed by Arthur Verslouis in his "American Transcendentalists and Asian Religions" gets to the heart-or at least one of the hearts-of areas where RWE and the gang give me pause. Brownson, of course, carved his way through the liberal Protestant landscape before embracing authority and the Roman Catholic Church...

"In brief (writes Verslouis) Brownson's criticism is that Transcendentalism takes rhetorically for itself the highest stations attainable within the various traditions and offers no effective means for realizing those stations. And in this respect Brownson's critique is indeed valuable, as each of the traditions on which Emersonian Transcendentalism draws depends on following a particular path. So if one were to choose among its teachings without having followed that path, one could certainly be accused of doing the given tradition an injustice. Much better, says Brownson, to enter into one of those paths-in particular, that of the church-and to follow it. One at least avoids the sin of misappropriation and superficiality."

life is but a dream sweetheart...

My posting recently has been sporadic which means, unfortunately, the same for my devotional life. One idea, however, has been going around in my head the past few days. I am reading much right now on the Transcendentalists and "Asian Religions" (right now Arthur Versluis', "American Transcendentalism and Asian Religions'" and a persistent issue is Emerson's perceived romantic self-centerdness. Verslouis writes of Emerson's use of the idea of Maya and "illusion" to "transcend" this problem:

"...there is another subtle but important ramification to his affirmation of maya's or illusion's, universality: Through this recognition of the universality of illusion, Emerson is able to affirm the illusory nature of the individual self as well and thus to avoid the tendency toward solipsism that so haunts English and to some extent European Romanticism. After all, the logical conclusion of the doctrine of maya must be that the individual ego is also contigent, that if the external world is a dream, then so are we ourselves. If the essence of the Romantic fallacy was the psychologizing internalization of religious truth, then by denying the ultimate reality of the ego, Emerson is effectively transcending the fundamental trap of Romanticism.

According to Emerson, man is truly man only when he transcends his limited self; man is meant to be more than man, to be a 'transparent eyeball' (using an echo of a Plotinian phrase), to be a 'god' sitting among 'gods,' or not to be an 'I' at all. Many critics have suggested that Emerson was fundamentally an egoist, and no doubt this is true, for as Nakagawa Soen Roshi once said, we are all egoists. But insufficient attention has been paid to Emerson's focus on transcending the self, for it is here, on the poet's illuminaation or inspiration, that Emerson's works are often actually centered. Pivotal here are Platonism and the Vedanta."

The line between self absorption and self transcendence is a fine line indeed and maybe the chief role of religion is to illuminate that line...