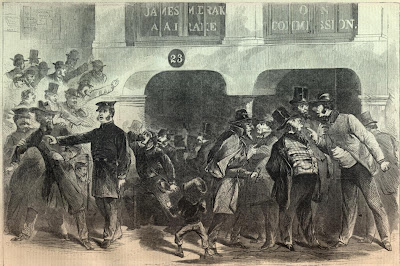 We left Brother Ware in his "Progress of the Christian Life" speaking of the importance of a devotional life and spirit.  But that, of course, is not enough.  That spirit must animate our "active life" as well.  Chapter 5 continued:

"Thus far, well. But the character is not yet complete: the habits of his active life make part of it. And what are they ? Do they correspond with this internal frame? Are they in harmony with these principles and sentiments?

We are ready at first to ask, " How can they be otherwise ? " But we are soon reminded that it is often even so. It is common to witness lamentable inconsistencies between the feelings and the conduct. Some men appear to live two lives. They seem to have two souls. In private thought and in familiar converse they are devout men. Their sensibilities are quick ; their emotions are strong; their sense of God lively; and they greatly enjoy their seasons of devotion and reading. But in the routine of life they are worldly, grasping, self-indulgent, devoted to gain, neglectful of trusts and duties, and far inferior to many who have no religious sensibility, who find little enjoyment in retirement and reflection, but who have accustomed themselves to the most scrupulous fidelity in every passing hour of social life.

It is to be with you, therefore, a matter of study and effort to carry the sentiment of the closet into action. The life of contemplation must not contradict the life of action. It is but partially that character is formed which is formed only by thinking, musing, and purposing. It wants the completeness of active habits. It wants the test which is to be found only in life. It wants the principle of growth which can be found only in action. And this is what is particularly to be considered in this connection — action is an essential and all-important means of religious growth; so much so, that even the contemplative graces, the virtues of the mind, true affection, exalted principle, benevolent dispositions, — which we are ready to believe thrive best in solitude; to cultivate which, multitudes have shut themselves out from the world, that they might have nothing to do but to meditate, read, and pray, —even these fail of their true perfection unless quickened and ripened by action. For consider a moment. When the mind is thus excited and glowing with divine truth and virtuous thoughts, is it not all so much impulse to do something I Does not the desire spring up spontaneously, prompting to act, — that is, to express itself? But there is no opportunity to act, and the impulse is denied. It is excited again, and again denied. What is the consequence ? It is enfeebled. It becomes less and less strong. It fades and dies from the soul."

Blessings
Posted by slt at 5:59 AM

Thanks for today's post. For myself, there's been too much thinking, talking and proposing and not enough action recently. I've printed out the last paragraph and put it on the wall.

Hi Elizabeth,
You and me both! Many thanks for writing and
blessings, BU