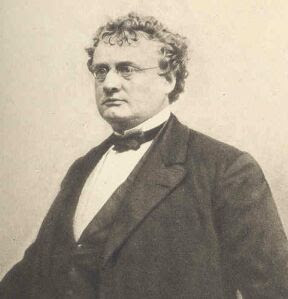 John Albion Andrew (1818– 1867) was a big man. Richard F. Miller, in his fascinating history of the the 20th Mass. Infantry, Harvard's Civil War, quotes a journalist who said that Andrew was "of such bulk that it seemed as if, while he sat still, nothing could move."
Born in Maine, Andrew graduated from Bowdoin College before becoming a lawyer in Massachusetts. His work on divorce and crmminal law did not endear him to the Boston Aristocracy nor did his staunch abolitionism. He become a Representative in the Mass. General Court, worked for the legal defence effort of John Brown, and, in 1860 was nominated for Governor "by," according to an 1880 memoir, "a genuine popular impulse which overwhelmed the old political managers who regarded him as an intruder upon the arena, and had laid other plans."
Known as the Great War Governor, Andrew immediatly began raising troops for the defence of the union, and Massachusetts soldiers would be first to the defence of Washington after Fort Sumter. Perhaps most famously, he would be an early advocate for the inclusion of African Americans in the military and would authorize the creation of the 54th and 55th Massachusetts, which included men from several states. Finally, though Andrew was a strong proponant of emancipation and a vigorous prosecutor of the war effort, he would counsel tolerance and generosity in reconstruction-advice that was all too little followed.
A very active member of James Freeman Clarke's Church of the Disciples (See the Dictionary of Unitarian Universalist Biography of Clarke at: http://www25-temp.uua.org/uuhs/duub/articles/jamesfreemanclarke.html,) Andrew's deep Unitarian faith sustained and informed his politics. "His Pastor, Mr. Clarke," records the above mentioned memoir, "has frequently given public testimony to the religious character of his parishioner and to the value of his services in the church. His heart was in this thing. He gave more time and devotion in this direction than will ever be known in this world; for many of his works were as quiet and unostentatious as they were earnest and effective." He served on committees, gave lay sermons, and much else for his churh. In 1865 he would preside over the first national Unitarian convention.
His biographer would sum up Andrew thus, "In what did his greatness consist? The answer is and always must be, 'In his character.' He was most emphatically what Milton calls a square and constant mind. He stands to-day the embodiment and representative of manliness, simplicity, truthfulness, justice,-of all the qualities which go to make up the spiritual substance of our being, which is all we can take with us when we leave this world, and which will never cease to influence those who may occupy the places we now occupy, and who may try to do the works that are set before us to do."
Andrew would be elected to five terms as Governor, refusing the nomination for a sixth in 1866. Tragically, he would die the following year.
The Boston Unitarian as Politician. Blessings
Posted by slt at 5:43 AM

Wow. I had never heard of him. Thanks for these gems.